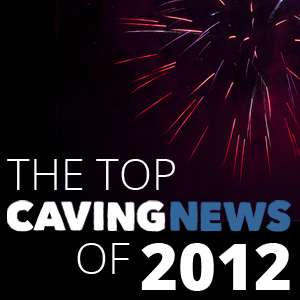 The Top Caving News of 2012. Remixed photo by nigelhowe/flickr

2012 has been an extremely exciting year for Caving News.

Beyond the nearly 200% increase in visitors, we launched a redesigned website, added a widget, published over 500 posts, partnered with the NSS, and surpassed 2400 cavers following us through various sites such as Facebook, Twitter and Google Plus.

Furthermore, as part of the affiliation with the NSS, we’ve also been able to add other features to the site including the weekly CaveChat recap, coverage of the NSS convention and recently previews of the upcoming NSS News.

We’d like to thank everyone who has supported us by sending in news, telling your friends about us, and even by just visiting the site. We look forward to making Caving News even better in 2013.

Now, without further ado, we count down this years most popular articles of caving news, ordered by the number of views.