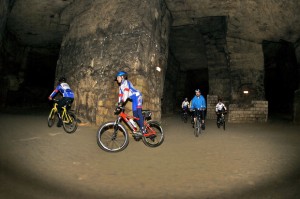 A mine in the Netherlands has been put to use as a one of a kind underground bike trail.

Created by ASP Adventure, the guided bike tour takes riders through a 70 kilometer (43 mile) long quarry that was first excavated by the Romans.

Since being dug the mine has been used in a variety of roles including, a military survival training area and a bomb shelter that held 15,000 people during the second world war.

Each participant on the 90 minute long tour is supplied with everything they need, including a bike equipped with a light.

If riding a bike underground is not your thing, ASP Adventure also holds a number of different walking tours as well as rock climbing and rappelling.

For more information about cycling underground in the Netherlands, visit the ASP Adventure website.

The Netherlands: Cycling into the shadows [nzherald.co.nz]