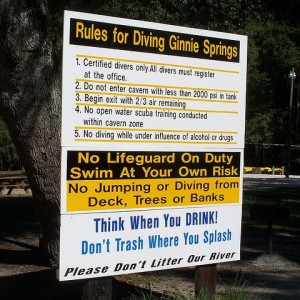 The body of a man was discovered this weekend in Ginnie Springs, Florida, having apparently drowned diving there two days earlier.

Identified as Steve Bennet of Hendersonville, Tennessee, the body was found by a group of divers on Sunday in the Devil’s Eye section of the cave system.

On Friday the man, who appeared to be diving alone, had rented diving equipment from the privately owned Ginnie Springs Outdoors park and campground.

Investigators found an open-water diving certificate in the mans car, but it was unclear if he was a certified cave diver.

Whether or not he had any experience in terms of cave diving, we do not know, Lt. David Aderholt, Gilchrist County Sheriff’s Office

The body was taken to the Medical Examiner’s Office in Gainesville for an autopsy.