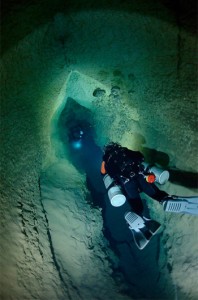 A five-day expedition to explore Phantom Springs Cave in western Texas has had some exciting results.

The expert team of cave divers, consisting of members of the ADM Exploration Team and Karst Underwater Research and researchers from Texas A&M University at Galveston, visited the cave this past January with the goal of investigating its fragile ecological habitat.

Home to the endangered Comanche Springs Pupfish and Pecos Gambusia, Phantom Spring Cave is owned by the Federal Bureau of Reclamation and access is extremely restricted.

Excited to do some exploration in the normally off limits location, the team got to work. Unexpectedly on the second day, divers in the upstream cave passage reached the depth limit the team was equipped for, when the passage quickly began to drop in depth.

The rest of the trip was spent collecting and recording specimens, characterizing the habitat, recording photos and videos, and using radio transmitters to help pinpoint significant biological features on the surface.

In nearly 40 dives and over 75 hours underwater, the team were successful in extending the length of the upstream cave passage by 285 meters (935 feet) and the depth by 51 meters (169 feet). The downstream cave passage, it was extended 141 meters (463 feet) further with no change in depth.

The result of these extensions increased the length of the cave to 3,000 meters (9,845 feet) and the depth to 72 meters (237 feet). This makes Phantom Cave Spring unofficially the 14th deepest and 17th longest cave in Texas, as well as the longest underwater cave in the United States outside of Florida.