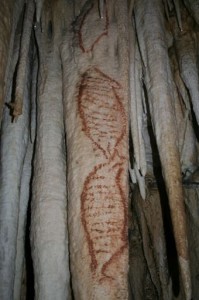 Photo via Caves of Nerja

Six paintings of seals in a Spanish Cave are now thought to be the oldest works of art ever found, surpassing those in Chauvet Cave in southern France by 10,000 years.

Scientists dated organic residue found next to the paintings, found in the Nerja Caves in Southern Spain, at being between 43,500 and 42,300 years old.

Even more interesting is that these paintings are believed to be the first artwork of Neanderthals ever discovered, as all previously found art was attributed to Homo sapiens.

Already known for containing the world’s largest stalagmite at 32 meters (105 feet) tall, the Nerja Caves were once home to Neanderthals, before they became extinct, and later prehistoric Homo sapiens.

The next step is to date the paintings themselves in order to find the exact date they were created, however the researchers have been hampered by a lack of funds.

The oldest work of art ever’: 42,000-year-old paintings of seals found in Spanish cave [Daily Mail]