Ten confirmed and six suspect counties were added during the latest white-nose syndrome map update released on May 28th. 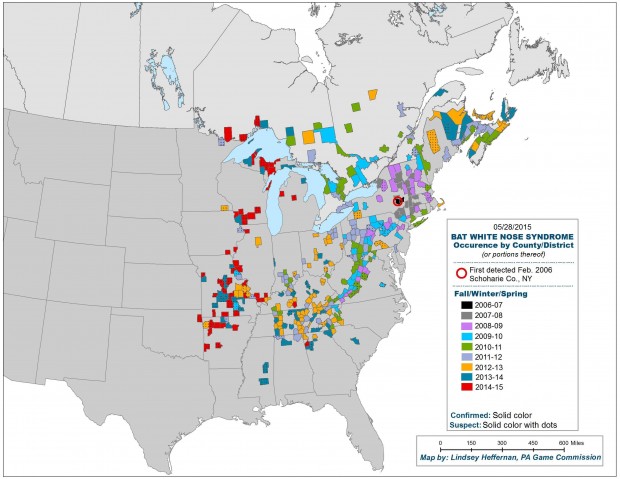 Winter surveillance in Wisconsin has found the disease on the move with Crawford, Richland, Door counties added as confirmed. In addition, Dane country was upgraded to confirmed and Iowa, Lafayette and Dodge included as suspect.

Joining them were Carrol, Adams and Pike counties in Illinois and Searcy and Franklin counties in Arkansas who too were confirmed positive. If that’s not enough, Arkansas’s Polk and Garland counties were included as suspect.

Meanwhile, after a brief reprieve, Oklahoma returns as the westernmost state where Pseudogymnoascus destructans is present after it was found in Delaware county, Oklahoma.

Last but not least, the southern part of Victoria county, New Brunswick was retroactively added for the winter of 2013/2014.

Produced by Lindsey Heffernan of the Pennsylvania Game Commission, the map shows the confirmed and suspected occurrences of WNS by county/district from its initial discovery in 2006 through May 28th, 2015.