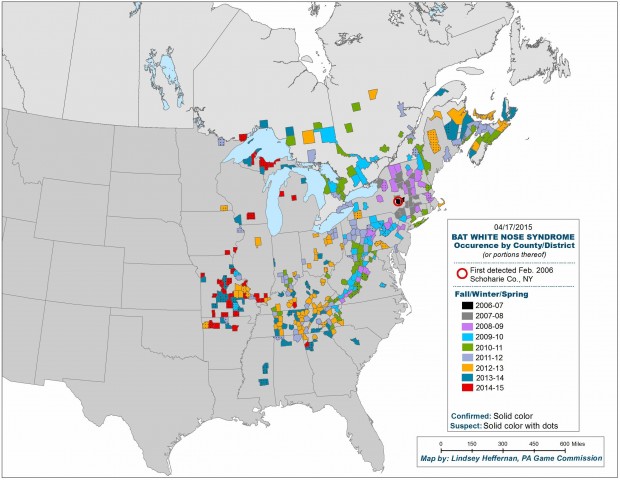 The additions come a day after the announcement by Iowa Department of Natural Resources that it has become the 26th state in the U.S. to confirm white-nose syndrome, following confirmations of the disease in Des Moines and Van Buren county.

Meanwhile Missouri is having a terrible year for the Pseudogymnoascus destructans, the fungus responsible for WNS, with its second big batch of suspect counties added to the map. The latest confirmations of the fungus show it present in Clay, Ralls, Moniteau, Ozark, St. Francois, Callaway, Cooper, and Miller counties.

Not very good news to come out on U.S. National Bat Appreciation Day.

Produced by Lindsey Heffernan of the Pennsylvania Game Commission, the map shows the confirmed and suspected occurrences of WNS by county/district from its initial discovery in 2006 through April 17st, 2015.