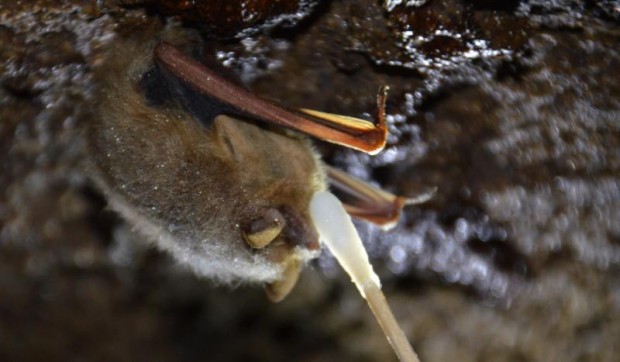 After a brief reprieve, Oklahoma returns as the westernmost state where Pseudogymnoascus destructans, the fungus that causes white-nose syndrome has been confirmed.

While disheartening, these results are not totally unexpected. This fungus has been documented in several counties just across the state line in Arkansas. Melynda Hickman, Oklahoma Department of Wildlife Conservation Wildlife Diversity Biologist

Oklahoma had been listed as a suspect state for several years after a single cave myotis (Myotis velifer) tested positive for the fungus in 2010. However, after re-examining the specimen in 2014, scientists with the U.S. Geological Survey National Wildlife Health Center discovered it to be a false positive.

In the aftermath of the 2010’s suspected case, the Wildlife Department created the Oklahoma Bat Coordinating Team who has worked to coordinate scientific cooperators, interested parties, stakeholders and user groups on bat and cave management, bat research and bat diseases in the state.

Made up of at least 20 entities that have direct bat and cave management responsibilities, the group has been active in creating the state’s white-nose syndrome response plan and participating in disease surveillance work in multiple cave systems in Oklahoma.

This latest detection of the fungus resulted from participation in a national study led by researchers at the University of California-Santa Cruz with funding and support from the National Science Foundation.

One positive aspect of the Delaware County finding is that although three bats have tested positive for the fungus, no dead bats were observed in the cave and there were no visible signs of the disease on any of the hibernating bats. Furthermore, all of the substrate samples from this cave were negative for the fungus. Melynda Hickman, Oklahoma Department of Wildlife Conservation Wildlife Diversity Biologist

To date 26 states and 5 Canadian provinces have been confirmed with white-nose syndrome, while P. destructans has been found in three additional states; Oklahoma, Minnesota, and Mississippi.