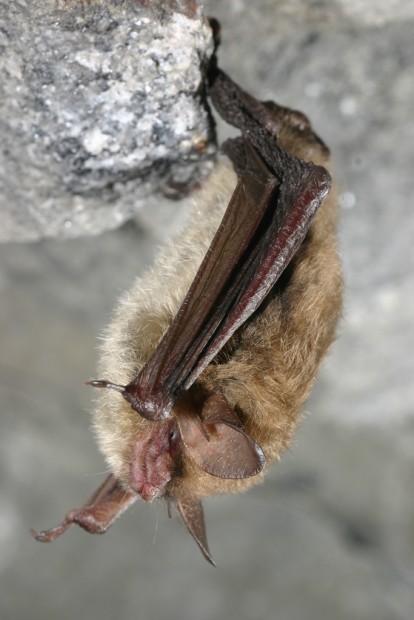 The Iowa Department of Natural Resources announced today that it has become the 26th state in the U.S. to confirm white-nose syndrome, after seven bats in two counties tested positive for the disease.

Two little brown bats and one northern long-eared bat observed near a cave entrance in Des Moines County showed visible signs of the disease during routine monitoring and surveillance. The bats were sent to the USGS-National Wildlife Health Center in Madison, Wisconsin where it was confirmed that the bats had white-nose syndrome.

Pseudogymnoascus destructans, the fungus that causes white-nose syndrome, was also detected on additional samples collected from the cave, which as recently as February 2014 had no visual signs of WNS.

Meanwhile the disease was also confirmed in four little brown bats collected in Van Buren County this winter after a concerned citizen reported bats flying around outside.

The discovery comes as no surprise as the fungus had previously been detected in caves at Maquoketa Caves State Park in 2011, 2012, and 2013. Curiously, it had not been detected during the last two winters.

In an effort to delay the inevitable arrival of the disease, Iowa DNR initiated seasonal cave closures and public education programs to teach decontamination procedures in hopes of prevent transporting the fungus between sites. The caves at Maquoketa Caves State Park remain seasonally open.

The Iowa DNR is also investigating an unconfirmed report of possible WNS in yet another county. Those samples are still being analyzed by the National Wildlife Health Center.

Iowa DNR advises that citizens can help bats by continuing to following all decontamination requirements and refraining from disturbing bats, especially during hibernation.

First discovered in 2006, white-nose syndrome has since spread to 26 states and five Canadian provinces and killed more than 5.7 million bats.