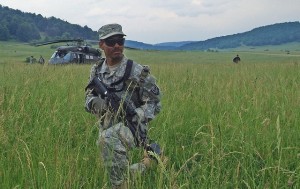 A soldier trains in Hohenfels, Germany, before deployment as a peacekeeper to Kosovo. Photo by Neal Snyder/U.S. Army Environmental Command

The project, funded by the European Union, will see some 3,000 acres — more than 7 percent of the training area — cleared to open flight corridors and the addition of fruit trees in some areas in hopes of attracting insects.

As critical habitats disappeared, military training areas — disconnected from pressures of development and public use — have become refuges to some of Europe’s most threatened plant and animal species.

At the Hohenfels Military Training Area in Bavaria, researchers have counted 19 bat species, including the greater horseshoe bat which has been reduced to a single breeding colony in Germany.

The colony, discovered inside an abandoned farmhouse in the town of Hohenburg on the northern border of the training area, flies out every evening to feed on the grounds, one of the few areas left that is free of pesticides.

Besides benefiting the bats, Army trainers are happy to clear some of the vegetation which has grown over some areas and has left less room to run exercises.

U.S. Army Europe manages 27 training areas in Europe, all but one of which are located in Germany.