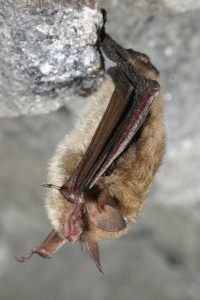 A Kentucky construction project is on hold while workers wait for recently protected northern long-eared bats and their young to vacate trees along Interstate 65.

Listed as a threatened species in April, northern long-eared bat habitats spend their winters in caves, but their summers are spent in trees roosting underneath bark or in cavities and crevices.

To protect their are pups, which are born in between late May and late July, there is a ban on the removal of trees for transportation project in June and July.

Bowling Green Daily News reports that the new ban is impacting road workers widening Interstate 65 between Bowling Green and Elizabethtown who need to clear trees in the right of way.

When notified of the new rules in early May, crews were able to get a jump on things and begin clearing trees before the June and July moratorium took effect.

Following severe population declines due to white-nose syndrome, a disease that has killed millions of cave-hibernating bats of many species in the United States and Canada, the USFWS initially proposed an “endangered” status for the bats in October 2013. However, during its review, the Service determined the northern long-eared bat was better suited to the lesser “threatened” classification.