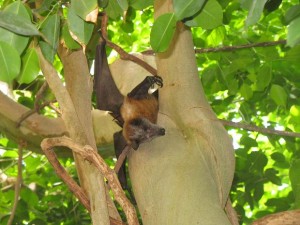 The largest fruit bat colony in the middle east has been decimated by vandals, with thousands of bats found slaughtered.

A routine check of the highly endangered bats, which reside in a cave in the Akkar region of northern Lebanon, found the fig trees outside the cave burned down, exposing the once sheltered entrance of the cave to sunlight and the elements.

Inside the cave, the situation was far worse, the cave floor littered with shotgun casings, AK-47 bullets, used fireworks and evidence of fires.

Suspected to have occurred last weekend, the attack saw nearly 5,000 of the 7,000 bats in the cave killed. Many having been shot and crawling to shelter before succumbing to their wounds.

Although no one knows who is responsible, Dr. Mounir Abi-Said, professor at the American University of Beirut and the Lebanese University and one of the researchers studying the bats, suspects that the attack could have been carried out by a person or group of people afraid of the animal and their associations with Dracula and vampire bats.

Fruit Bats, which a wingspan of up to 75 centimeters (2 feet, 5 inches), are the only bat species in Lebanon which does not hibernate. Adapted to tropical climates, they stay warm enough to stay active all year long.

As part of the research, which began in 2007, the colony receives weekly checks between December and February.

All Lebanese bats are classified as “highly endangered” due to the heavy use of pesticides in the region and the destruction of their habitat.