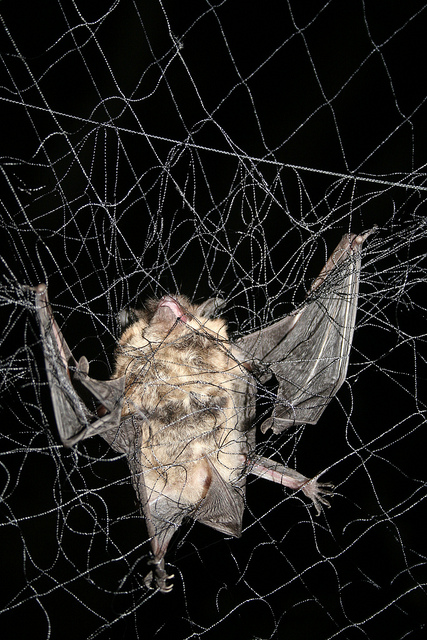 An environmental resource specialist for the U.S. Army Corps of Engineers charged with netting bats has noticed a continued decline of bats around Surry Mountain Dam.

The bats began being netted six years ago to help makes better, more informed wildlife management decisions at Army Corps’ dams. The bats are netted over a four-hour period twice a month between late May and early October.

In the past numbers had ranged around 25 to 30 bats a night. Now they are lucky to catch one. New Hampshire’s most common bat, the little brown bat is showing the highest decline.

Between late July and early August 2008, he caught 43 bats at Surry dam. Eleven of those were little browns. This year, during that same time period, he caught 35 bats — and not one little brown.

This decline can likely be attributed to white-nose syndrome, the disease decimating bat populations in the eastern US and Canada.

On glimmer of hope rest on two old second world war era military weapons storage bunkers in New Hampshire where in 2010, 77 bats were found hibernating. This year, it was discovered that the population, which included rare Eastern small-footed bats, little brown and big brown bats and Northern long-eared bats, had doubled to 114.

With preliminary results for the fungus that causes white-nose syndrome coming back as negative, there is hope that controlling temperature and humidity might allow the bats to survive.

DYING OFF: Bat populations continue to drop across region [SentinelSource.com]