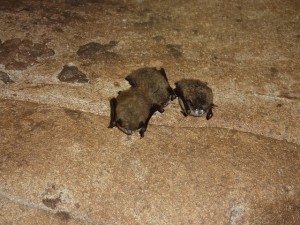 An initial report from the recent annual white-nose syndrome meeting indicates that scientists are making progress into understanding the disease which has been decimating bats since 2006.

In her account of the private meeting which brought together 170 scientists and land managers with many more conferencing in from all over, Sylvia Fallon, a senior scientist working for the Natural Resources Defense Council once again confirmed that fungus geomyces destructans is indeed the cause of white-nose syndrome.

Also discussed was the strengthened hypothesis that the fungus was accidentally introduced to North America from Europe (instead of being a mutated North American fungus). Most exciting is further news that there may be signs of some bats surviving the disease, although the work to confirm it is still ongoing.

To read the report, check out Sylvia Fallon’s report on her blog over on the NRDC website.

Responding to the bat signal: scientists at work on white-nose syndrome [Sylvia Fallon]