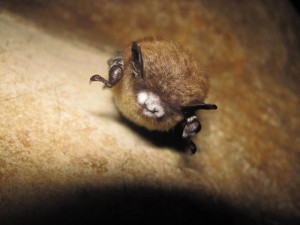 Encouraging results from this past winters surveys of New York’s hibernating bats show a number of caves reporting substantial increases in their bat populations.

While surveys in previous years seemed to suggest stabilization of the little brown bat population, this recent survey found that three out of the five caves in the greater Albany area, where white-nose syndrome was first discovered, are now actually showing a marked increase. The cave with the largest increase went from 1,496 little brown bats in 2011 to 2,402 this year, a population increase of about 60%.

Officials from the New York State Department of Environmental Conservation, who undertook the survey with cooperation with the U.S. Fish and Wildlife Service and many volunteers, were quick to point out that it is “premature to conclude that population recovery is underway for this species”, citing that alternate explanations could be possible for the increase.

While we remain cautiously optimistic of encouraging trends for some species seen more recently, it will likely take several years before we fully know how to interpret this, Kathleen Moser, DEC’s Assistant Commissioner of Natural Resources

The press release also provided results of the recent surveys.

* No surveys conducted this winter on the Indiana bat. The count comes from earlier surveys. New surveys are scheduled for 2013.