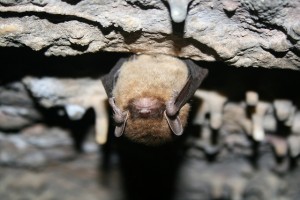 According to research published yesterday in the Nature, the international weekly journal of science, scientists have been able to offer the first conclusive evidence that the fungus Geomyces destructans causes white-nose syndrome.

As part of the research healthy little brown bats were collected from Wisconsin and then administered spores of the fungus to the skin or though contact with other infected bats from New York.

One hundred percent of little brown bats directly exposed Geomyces destructans developed white-nose syndrome, while 16 of the 18 exposed to the New York bats developed the condition.

“While our study confirmed that G. destructans is spread bat-to-bat, it is also important to note that virtually all pathogens, especially spore-producing fungi, are spread by multiple routes,”

“This is the reason that in an effort to further control the spread of WNS, resource management agencies have implemented universal precautions, including limiting human access to sensitive environments occupied by bats, decontaminating equipment and clothing moved between these environments, and restricting the movement of equipment between sites.” – David Blehert, USGS National Wildlife Health Center Microbiologist

Although the bats involved in the experiment did not die, the results showed that the exposure to Geomyces destructans itself would cause the familiar white fungus to begin growing on the muzzles and wings of previously healthy bats.

“By identifying what causes WNS, this study will greatly enhance the ability of decision makers to develop management strategies to preserve vulnerable bat populations and the ecosystem services that they provide in the U.S. and Canada,” – Anne Kinsinger, USGS Associate Director of Ecosystems

To find out more, the full article can be found at Nature.com.

In addition, the USGS has posted an interview with David Blehert microbiologist and senior author of the article as he discusses the significant findings.