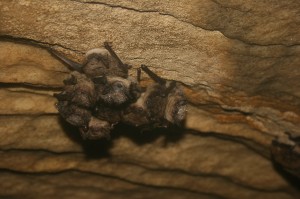 For the first time since White-nose Syndrome appeared in 2006, scientists with the U.S. Geological Survey and the University of Wisconsin have developed a detailed explanation of how the devastating disease has killed millions of North American bats.

Their research, published in BMC Physiology, created a model for how the disease progresses from initial infection to death in bats during hibernation.

This model is exciting for us, because we now have a framework for understanding how the disease functions within a bat. The mechanisms detailed in this model will be critical for properly timed and effective disease mitigation strategies. Michelle Verant, University of Wisconsin and USGS National Wildlife Health Center Scientist and lead author of the study

The hypothesis was that WNS, caused by the fungus Pseudogymnoascus destructans, makes bats die by increasing the amount of energy they use during winter hibernation. Due to this increased energy usage, bats must carefully ration their energy supply during this time to survive without eating until spring. If they use up their limited energy reserves too quickly, they would die.

The USGS tested the energy depletion hypothesis by measuring the amounts of energy used by infected and healthy bats hibernating under similar conditions. They found that bats with WNS used twice as much energy as healthy bats during hibernation and had potentially life-threatening physiologic imbalances, such as elevated levels of dissolved carbon dioxide and potassium, that could inhibit normal body functions.

Researchers also found that these effects started before there was severe damage to the wings of the bats and before the disease caused increased activity levels in the hibernating bats.

Clinical signs are not the start of the disease — they likely reflect more advanced disease stages. This finding is important because much of our attention previously was directed toward what we now know to be bats in later stages of the disease, when we observe visible fungal infections and behavioral changes.Michelle Verant, University of Wisconsin and USGS National Wildlife Health Center Scientist