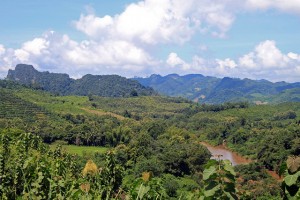 On the 10th anniversary of the first Lao expedition, which took place in December 2002, the 2012 trip re-visited areas previously explored.

Despite some initial doubts as to the success an expedition to re-visit the area, the end results proved positive with an extended caving area and promising leads.

For the first time, the cavers split themselves into two independent teams. The first team of nine cavers explored the Luang Nam Tha province and Luang Prabang province in the north while the second team of four visited Houaphan province in the east.

Along roads in Vieng Phouka, a number of short river caves, several hundred meters long were discovered and a 2 kilometer (1.24 mile) long river cave system was found in Muang Ngoy. Many caves were also discovered along the road with the Vietnamese border in Vieng Xay, and a new area about 25 kilometers (15 miles) north of Sam Neua was found with disappearing rivers.

In the 10 years since the project began 36 cavers from 15 countries have participated in expeditions that have visited six provinces and mapped 92 kilometers (57 miles) of cave passages in Northern Laos.

More information and photos of the expedition can be found on the 2012 Northern Lao – European Cave Project Expedition page.