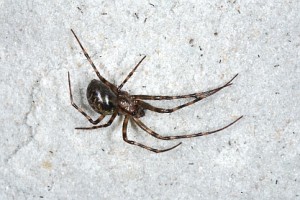 Photo via European Society of Arachnology

For the large cave spider, 2012 is poised to be an exciting year. Having recently been voted as both the 2012 European Spider of the Year and the German Cave Animal of 2012, the spider will be gaining a lot of attention over the next 12 months.

The cave spider (Meta menardi) is part of the long-jawed spider (Tetragnathidae) family and is of one of 955 species of long-jawed spider known throughout the world. While itself only occurring throughout Europe, northern Asia, northern Africa, and the north and central parts of the Middle East, it spends its life in caves, cellars, mines with a medium level of humidity and a constant temperature above 7 Celsius (45 Fahrenheit).

Although it builds a web up to 30 centimetres (12 inches) wide, this spider has adapted to life underground and no longer relies on its web to catch its food. It spends its time hunting near the walls of a cave, preying upon woodlice, beetles, centipedes, millipedes, overwintering butterflies and moths and other small animals.

Selected by Verband der deutschen Höhlen- und Karstforscher e.V. (the German Association of Cave and Karst Research) in an effort to highlight the importance of studying subterranean ecosystems, the European Society of Arachnology has shown solidarity and chosen to recognize it as well.

Cooperation between cavers and researchers is crucial to learn more about underground habitats as researchers are often reliant on local knowledge and expertise from cavers in gain access to the underground ecosystems.