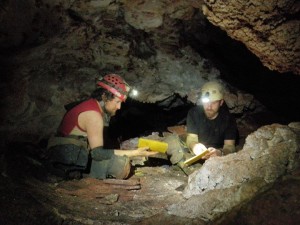 Cavers Chris Pelczarski and Dan Austin (left to right) updating their cave journals during the recent trip exploring in the western branch of Jewel Cave. Photo via NPS

South Dakota’s Jewel Cave has just squeezed past the 177 mile (284 kilometer) mark thanks to a recent super productive three-day expedition that ran from April 10th to 13th.

In a Facebook post, NPS Staff report six volunteer cavers participated in the trip which focused on exploring new passages beyond a constriction area known as the Southwest Splinter in the western branch of the cave.

The group worked out of the recently established West Camp, finding passages in a variety of sizes. Some were as large as 20 feet wide and 70 feet high and given names such as “Weary Boulevard,” WYSIWYG (What You See Is What You Get), The Limestone Lunchroom, Sequence Hall, and High Country.

Of that length, 5.3 miles (8.5 kilometers) is from areas beyond the Southwest Splinter found since June of 2014.