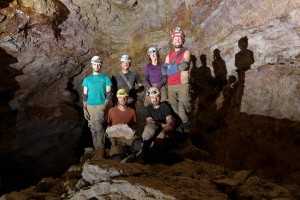 Over the Valentine’s Day Weekend, a two teams of cavers pushed South Dakota’s Jewel Cave past the 175 mile mark.

Jewel Cave National Monument reports that the cavers spent February 13th to 16th at West Camp, established in the western branch of Jewel Cave this past fall. Working from there, the headed south before splitting up. One group explored an area to the northeast, while the second to the south.

One of the newly discovered passages has been fittingly dubbed “The Heartland Express,” in honor of the holiday weekend.

Besides the additional length, one of the teams also increased the known depth of the cave to 677 feet (206.3 meters).

Finally, and perhaps most exciting, despite their hard work, the teams left over 100 unexplored leads still begging to be checked. Although there is no date yet set for a followup expedition, you can bet it won’t be before too long.

This past weekend’s trip reflects the significance of Jewel Cave.Not only does the mapping and surveying lengthen the cave’s overall mileage, but the new discoveries extend its relevance as one of the great frontiers in the natural world. John Black, Jewel Cave National Monument Acting Superintendent

Despite the valiant efforts of the explorers, which map about 5 miles (8 kilometers) each year, Jewel Cave still remains the third longest known cave in the world behind Kentucky’s 400 mile (643.7 kilometer) long Mammoth Cave System and Sistema Sac Actun in Mexico’s Yucatán Peninsula, at 206.9 miles (332.9 kilometers). 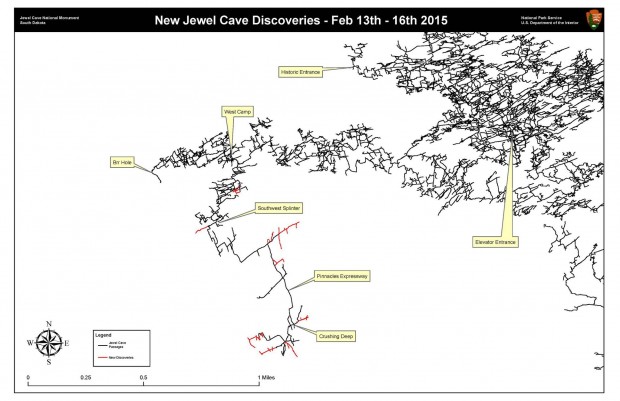 Results from February 2015 Surveys in Jewel Cave. Image via NPS