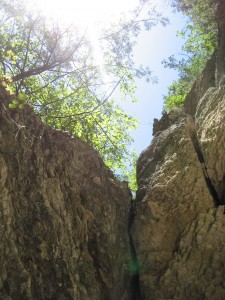 Looking out from inside Decorah, Iowa’s Ice Cave. Photo by Denise Krebs/flickr

A woman was rescued from inside Iowa’s Ice Cave after she fell during a visit last Wednesday, April 1st.

The woman had been visiting the cave, a popular destination in the spring, when she slipped on the ice and slid down into the cave tells Derorah Newspapers.

The Decorah Police Department, Decorah Fire and Rescue and Winneshiek Medical Center Ambulance Service responded to the evening incident and soon found the woman with a severely damaged ankle.

She was stabilized before being extracted from the cave and taken by ambulance to Winneshiek Medical Center.

Located in Decorah, Iowa, Ice Cave’s signature formations occur not in winter as you’d expect, but during the spring thanks to a cold sink effect which captures the freezing air. When the spring melt occurs the water enters the cave and freezes on contact with its cold walls, only reaching maximum thickness in June.