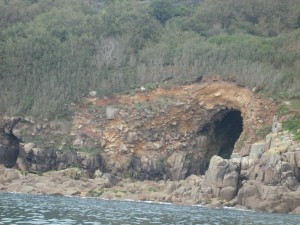 Mousehole Cave beneath the village of Mousehole. Photo by asands/flickr

A woman was airlifted by helicopter after she fell 5 meters (16 feet) at Mousehole cave in Southwest England this weekend.

The Cornishman reports that the woman, thought to be a visitor to the area, suffered a head and ankle injury from the fall on Saturday afternoon.

Members of the Penzance Coastguard Rescue Team along with the South West Ambulance Service and the 193 rescue helicopter unit from RNAS Culdrose attended the incident.

The woman, believed to be in her forties, was eventually airlifted to the Royal Cornwall Hospital Treliske in nearby Truro.

Mousehole cave is a large sea cave on the western side of Mount’s Bay, a few hundred yards along the coast from the village of Mousehole.