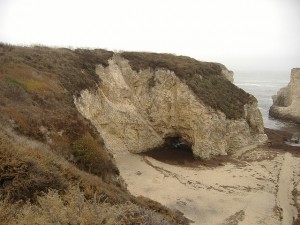 The Pacific coast at Davenport, California. Photo by Kim Scarborough/flickr

A woman was rescued from a Californian sea cave recently after she slipped and fell.

The incident occurred near Davenport, a small town about 14 kilometers (9 miles) north of Santa Cruz, on August 31st at about 3:00 pm.

A 54-year-old woman was exploring the sea cave, reportedly with two openings and extending under Highway 1, with a friend when she slipped.

Rescuers were called, but were unable to locate the woman who was still in the cave. Eventually, after making contact with the person who reported it, they found her in the cave.

The woman was then transported by ambulance to Dominican Hospital for nonlife-threatening injuries.