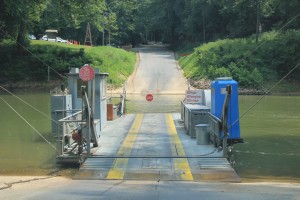 Two people died after their vehicle drove off the end of the Green River Ferry in Mammoth Cave National Park on Tuesday.

Local media reports that while loading vehicles on the south side of the Green River shortly after 2:00pm, one vehicle failed to stop and drove off the far end of the ferry and into the river.

Located eventually by search and rescuers around 4:45pm, the car was found under 16 feet (5 meters) of water about 50 feet (15 meters) down river from where it entered.

With the help of divers a tow truck cable was attached to the vehicle and it was pulled to shore just before 8:00pm.

Running through Mammoth Cave National Park, the Green River can be crossed within the park via Green River Ferry or Houchin Ferry—two of the few operating rural ferries in America.