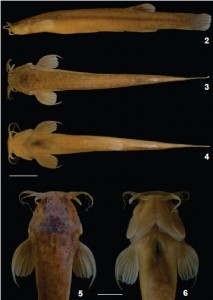 A small troglomorphic catfish has been recently discovered by researchers in Brazil.

Described in the latest edition of the Brazilian Zoological Society’s journal Zoologia, the specimens were found in Gruna da Tarimba, a 12 kilometer (7.45 mile) long cave system in the central Brazilian state of Goias.

Dubbed Ituglanis boticario, the small fish is less than 10 cm long. Despite its small size, it is the top predator in the cave, feeding on larvae and insects.

Unfortunately, the species appears to be endemic to the one cave.

With its shallow pools and low flow, the cave environment and its various inhabitants are susceptible to contamination from the expansion of cattle ranching, deforestation and pollution in the region as well as human visitation.

As a result the researchers strongly recommend increasing the protection of the cave, home to another unique fish species, two species of bats and a diversity of troglobitic and non-troglobitic invertebrates as well as one of the largest most important caves in Brazil.