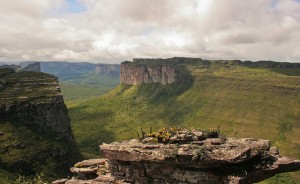 A new species of cave dwelling tarantula has been discovered in the sandstone/quartizitic caves of Brazil’s Chapada Diamantina National Park.

Described by Brazilian researchers in the current issue of the Annals of the Brazilian Academy of Sciences, this spider is only the fifth species to be found in the genus Tmesiphantes, and the first record of a troglobitic tarantula being found in Brazil.

Despite the high diversity and wide distribution of tarantulas throughout most tropical and subtropical areas in the world, only a few troglobitic species are known and each of them are endemic to individual Mexican caves.

It makes it all the more exciting that the two female examples of this species have been located in two different caves, Gruna das Cobras and Gruna da Parede Vermelha, some 800 meters (2,625 feet) apart from each other.