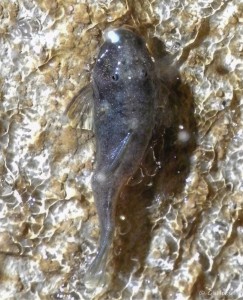 Cavers recently came upon small catfish climbing up a steep waterfall during a flora and fauna inventory of a cave in Ecuador.

The report, published in the journal Subterranean Biology, tells of a number of fish making their way up 70 to 90 degree flowstone waterfalls about 1.5 meters (5 foot) high inside Grieta Maria Jauna near Tena in Ecuador’s Napo District.

The fish were climbing through a 0.5–1.5 centimeter (0.2–0.6 inch) thick sheet of water over the flowstone that originated in an area of two to three small openings on the east side of the main passage about 3 meters (10 feet) above the stream level.

While climbing fish are not unheard of, this is the first such observation of this species, determined to be Chaetostoma microps (Siluriformes Loricariidae), or any of its family, climbing in a cave.

Chaetostoma microps are a freshwater fish that are endemic to the upper reaches of the Amazon basin in Ecuador.