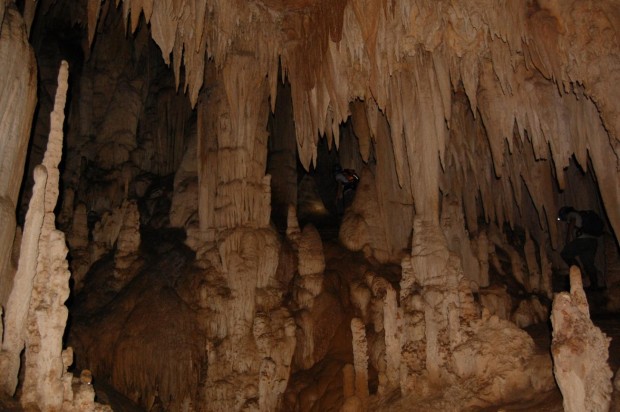 Scientists have produced a rainfall record strongly suggesting that man-made industrial emissions have contributed to less rainfall in the northern tropics.

The research, published in the journal Nature Geoscience this week, reconstructed rainfall patterns stretching back more than 450 years by analyzing the chemical composition of a stalagmite recovered from Yok Balum cave in Belize.

The team, led by experts at Durham University, UK, identified a substantial drying trend from 1850 onwards, coinciding with a steady rise in sulphate aerosols in the atmosphere as a result of burning fossil fuels to drive the industrial boom in Europe and North America.

Importantly they also identified nine short-lived drier spells in the northern tropics since 1550 following very large volcanic eruptions in the Northern Hemisphere that produced similar emissions as those produced by burning fossil fuels.

This provided very strong evidence that any injection of sulphate aerosols into the upper atmosphere could lead to shifts in rainfall patterns. The sulphate aerosols are suspected of moderating temperatures in the Northern Hemisphere by reflecting the Sun’s radiation.

As a result the Intertropical Convergence Zone (ITCZ)—a tropical rainfall belt near the equator—shifted towards the warmer Southern Hemisphere leading to dryer conditions in the northern tropics.

The research presents strong evidence that industrial sulphate emissions have shifted this important rainfall belt, particularly over the last 100 years.

Although warming due to man-made carbon dioxide emissions has been of global importance, the shifting of rain belts due to aerosol emissions is locally critical, as many regions of the world depend on this seasonal rainfall for agriculture.

The role of sulphate aerosols in repositioning the ITCZ was previously identified using computer modelling, but until now no suitable climate record existed to support those ideas.

Our research allows us to make more accurate predictions about future climate trends and it appears that regional sulphate aerosol production is an essential factor to include in these predictions. Dr. Harriet Ridley, Department of Earth Sciences at Durham University

The interpretations were made possible because of the quality of the stalagmite sample they obtained from the Yok Balum cave in Belize, which is located at the northernmost extent of the modern day ITCZ and is sensitive to changes in its position.

The stalagmite was composed entirely of mineral aragonite, and subtle changes in the chemistry of the mineral were linked to rainfall variability. The stalagmite grew remarkably quickly and was easily dated.

The fact that tropical drying follows both Northern Hemisphere volcanic and industrial sulphate injections is critical. It essentially rules out the possibility that the climate shifts were caused by a previously unknown natural climate cycle or increasing atmospheric carbon dioxide concentrations. Dr. James Baldini, Department of Earth Sciences at Durham University

The work was funded by the European Research Council, the National Science Foundation of the United States, the Alphawood Foundation and the Schweizer National Fund, Sinergia.