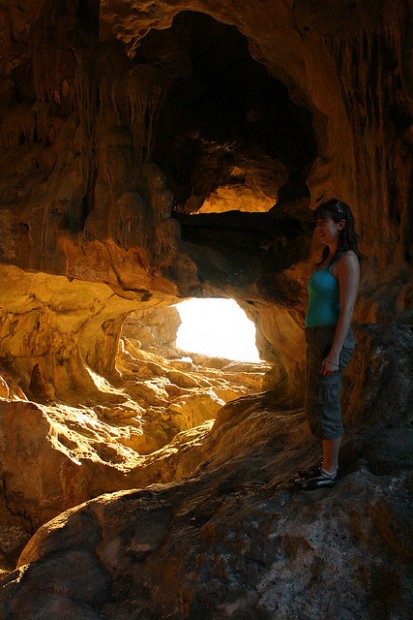 Researchers from the University of Alabama have been busy visiting the remote South Pacific island of Niue this summer to study climate change by venturing into the islands caves.

What draws scientists to the island, which lies about 2,400 kilometers (1,500 miles) northeast of New Zealand, is that it is composed of limestone rather than the much more common volcanic rock that other islands are made of.

This limestone, and the caves that form within it hold a wealth of historical climate data hidden within stalagmites.

These slow forming stalagmites hold traces of carbon and oxygen. The number of carbon and oxygen isotopes in each layer of the stalagmite correlates with the amount of rainfall when the layer developed, not unlike a tree with it’s rings. The benefit of stalagmites over trees, is that they form over thousands of years, leaving a long historic record.

Interestingly, stalactites which form on the ceilings are not as useful as stalagmites as their central tube often clogs, leaving a much shorter record than commonly found in stalagmites.

The aim of the research is to discover the climate pattern before humans started affecting it by adding carbon dioxide and other greenhouse gases to the atmosphere. An attempt is being made to build a climate timeline that covers the past 10,000 years, which involves a corresponding 10,000 samples to analyse.