Stalagmite Sheds Light on Past Climate in the Pacific Northwest 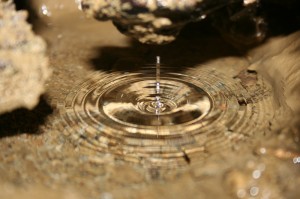 A 13,000 year old stalagmite harvested from Oregon Caves National Monument has shed new light on the historic climate of the Pacific Northwest.

In a study, published last month in the journal Nature Communications, researchers used stable isotopes from the speleothem to reconstruct winter climate change for most of the past 13,000 years.

In places like the Pacific Northwest, the usual method of gathering climate past climate data, from tree rings, only gives information about summers when the plants are growing and leaves the other half of the year a mystery. When combined, the summer and winter data can now offer researchers a more complete picture.

Analysis of the data now shows that the region has seen rapid shifts between dry and warm, and wet and cold periods, similar to the currently observed Pacific Decadal Oscillation, a pattern of climate variability that shifts phases about every 20 to 30 years.

Unfortunately for researchers the speleothem stopped growing prior to the industrial age, and thus contains no clues about how recent human activities have influenced the regions winters.