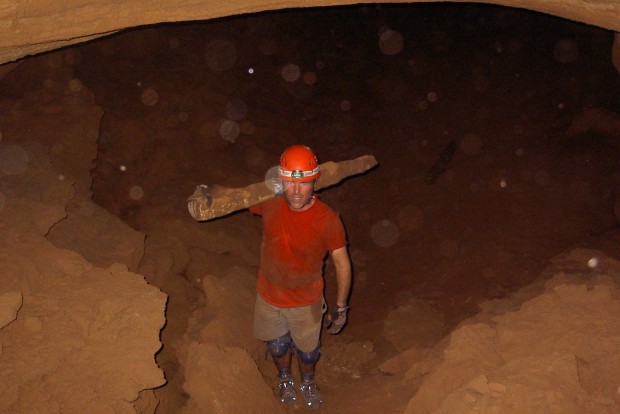 Rhawn Denniston, professor of geology at Cornell College, with one of the stalagmites that helped create a record of tropical cyclones going back more than 2,000 years. Photo via Cornell College

In a paper published this week in the journal Proceedings of the National Academy of Sciences, an international team of researchers led by Rhawn Denniston, professor of geology at Cornell College present a precisely dated stalagmite record of cave flooding events that are tied to tropical cyclones, which include storms such as hurricanes and typhoons.

Seeing mud accumulations like these was really unusual. There was no doubt that the mud layers came from the cave having flooded. The water stirred up the sediment and when the water receded, the mud coated everything in the cave—the floor, the walls, and the stalagmites. Then the stalagmites started forming again and the mud got trapped inside. Rhawn Denniston, Cornell College Professor of Geology

Angelique Gonzales, who worked with Denniston on the research, examined nearly 11 meters (36 feet) of stalagmites, measuring them in half millimeter increments and recording the location and thickness of mud layers. This work gave the team more than 2,000 years of data about the frequency of cave flooding.

But the origins of the floods were still unclear. Given the area’s climatology, Denniston found that these rains could have come from the Australian monsoon or from tropical cyclones.

We were sort of stuck but then I started working with Gabriele. Rhawn Denniston, Cornell College Professor of Geology

Gabriele Villarini, an assistant professor of engineering at the University of Iowa who studies extreme meteorological events and what drives the frequency and magnitude of those events, was brought in to help. With Denniston and Gonzales, Villarini examined historical rainfall records from a weather station near the cave.

The largest rainfall events, almost regardless of duration, are tied to tropical cyclones. Gabriele Villarini, University of Iowa Assistant Professor of Engineering 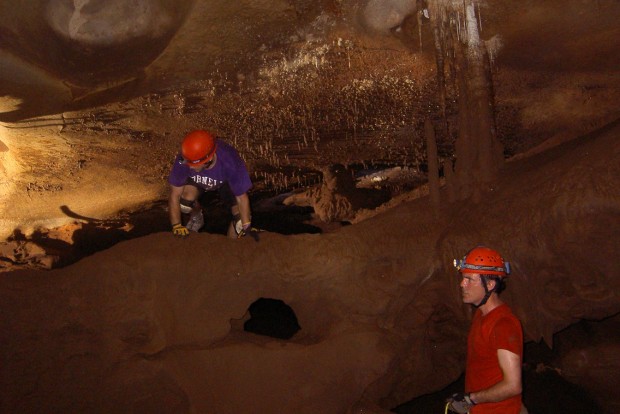 The resulting data tell scientists about more than just the frequencies of tropical cyclones in one part of Australia over the past 2,200 years. A major driver of year-to-year changes in tropical cyclones around the world is the El Niño/Southern Oscillation, which influences weather patterns across the globe. During El Niño events, for example, Australia and the Atlantic generally experience fewer tropical cyclones, while during La Niña events, the climatological opposite of El Niño, the regions see more tropical cyclones.

Our work, and that of several other researchers, reveals that the frequency of storms has changed over the past hundreds and thousands of years. But why? Could it have been due to El Niño? Direct observations only go back about a hundred years, and there hasn’t been much variation in the nature of the El Niño/Southern Oscillation over that time. Further back there was more, and so our goal was to test the link between storms and El Niño in prehistory. Rhawn Denniston, Cornell College Professor of Geology

The team noted that the variations over time in the numbers of flood events recorded by his stalagmites matched reconstructed numbers of hurricanes in the Atlantic, Gulf of Mexico, and Caribbean.

Tropical cyclone activity in these regions responds similarly to El Niño, and previous studies had also suggested that some periods, such as those when we had lots of flood layers in our stalagmites, were likely characterized by more frequent La Niñas. Similarly, times with fewer storms were characterized by more frequent El Niños. Rhawn Denniston, Cornell College Professor of Geology

The results of this study mark an important step towards understanding how future climate change may be expressed.

It is difficult to use climate models to study hurricane activity, and so studies such as ours, which produced a record of storms under different climate conditions, are important for our understanding of future storm activity. Rhawn Denniston, Cornell College Professor of Geology

Denniston is now gearing up to establish a detailed cave monitoring program in this and other regional caves.