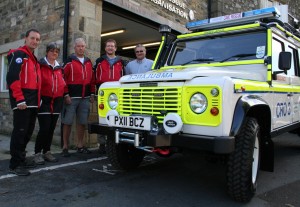 Members of the Clapham’s Cave Rescue Organisation were kept hopping over the weekend with three separate call-outs.

Using a gas detector to check for foul air, the team determined it safe and began assessing the hole. Instead of a mine shaft, they suggested that the 8 meter (26 foot) deep hole was likely a buried kiln that had collapsed.

Before leaving, members advised a fencing contractor of the appropriate distance to erect a barrier around the area, which is liable to collapse further.

Later that same afternoon the CRO were notified of an incident where a 14-year-old girl suffered a very painful locked hip-joint. The novice caver, who had a history of the condition, had been exiting Lower Long Churn Cave with a school group when the event occurred.

After being moved to the entrance, CRO members administered pain relief and sheltered the girl until she was taken to hospital by air ambulance.

As if that wasn’t enough excitement for one weekend, Sunday saw another call-out.

A 59-year-old caver injured his hip after he fell about 5 meters (16 feet) near ‘The Bridge’ in Yorkshire’s Rift Pot. Despite his injury, he was able to return up three pitches to the entrance of the cave where he was administered pain relief by rescuers.

He was then transported by sledge over snow and grass to the CRO vehicle for transit to Clampham and eventual transfer to an ambulance.