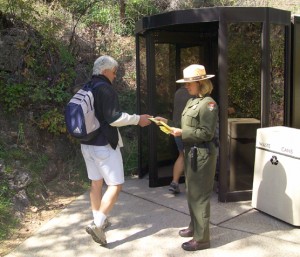 Not to be left behind by other National Parks who have been raising their cave tour ticket prices, South Dakota’s Wind Cave National Park has released a proposal to raise their fees by a few dollars.

There would be no change in the fee structure. For children up to 5 years of age, cave tours are free. People 6 to 16 years of age, along with holders of the Senior or Access Pass, will remain half price.

The change came about after a review of the fees being changed at the parks Elk Mountain Campground, which was threatened to be closed this spring due to budget cuts.

To make the campground financially self-sufficient, we realized we needed to consider raising the nightly camping fee. That caused us to also examine our cave tour fees which we haven’t raised since 2005. With these new fees, we would be more in line with what other caves in the Black Hills are charging. Vidal Davila, Wind Cave National Park Superintendent

To keep the public informed and to solicit feedback the park is holding three open houses to discuss the proposal. The first open house will be held Monday, September 23, in Rapid City at the South Dakota Game, Fish and Parks Outdoor Campus West at 4130 Adventure Trail. Tuesday, September 24, park officials will be at the Hot Springs Library at 2005 Library Drive. The last meeting will held in Custer the following night, Wednesday, September 25, at the Black Hills National Forest Supervisor’s Office located at 1019 N. 5th Street. All meetings will be from 4 p.m. to 6 p.m. and have an open house format with no formal presentation.

Anytime you raise fees in a national park, it’s a fine line. You don’t want to price out the very people you are here to serve, while at the same time, in these challenging budget times, the park is allowed to keeps 80% of the money to fund projects with direct visitor benefits. Vidal Davila, Wind Cave National Park Superintendent