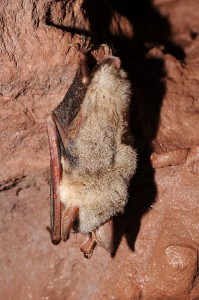 The greater mouse-eared bat, Myotis myotis, is a European species of bat in the Vespertilionidae family. Photo by Thomas Bresson/Wikipedia

An international team of scientists have recently discovered five new species of bats in West Africa.

The team, made up of researchers from the Czech University of Life Sciences and the Academy of Sciences, Charles University in the Czech Republic and England’s University of York, discovered a wealth of unexpected diversity among Vesper bats in Senegal.

During seven expeditions to the Niokolo-Koba National Park in south-eastern Senegal the researchers studied 213 vespertilionid bats. Through subsequent genetic analysis of the species, the scientists discovered that although five specific species of bats looked similar to other species in Africa, Pipistrellus hesperidus, Nycticeinops schlieffenii, Scotoecus hirundo, Neoromicia nana and Neoromicia somalica, they were genetically different.

The fact that these Senegalese bats are unrelated and are different to their cousins in other parts of Africa, suggests that West Africa may have been isolated in the past and formed a refugium, where populations gradually diverged and even acquired new chromosomal configurations. “This exciting finding confirms that West Africa may represent an underestimated bio-geographic hotspot with many more species to discover. Nancy Irwin, University of York Department of Biology

Taxonomists are now working on describing these new species — Vesper bats (Vespertilionidae) are already the largest family of bats with more than 400 known species. Their research is published in Frontiers in Zoology.