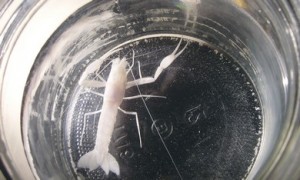 Scientists have identified eight new species found living completely cut off from the surface in a cave near Ramle, Israel.

Initially situated about 100 meters (328 feet) below the surface, Ayalon Cave was discovered in April 2006 when a bulldozer working in a quarry above happened to open an entrance to the previously isolated system.

Researchers descending on the 2.7 kilometer (1.7 mile) long cave immediately after it was discovered, found an independent ecosystem that wasn’t based on photosynthesis. Instead energy was extracted by Chemoautotrophic bacteria, living in a film on top of a pool of groundwater.

Small arthropods discovered in the cave, suspected to be endemic to the cave, are believed to have been isolated for millions of years after crawling in very tiny holes to reach the cavern.

The eighth new species has been identified as belonging to the group Collembola, but it has not yet been named.