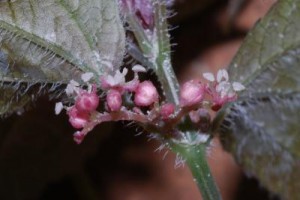 Flowers of a new species from the nettle family known only from caves, Pilea cavernicola, where it grows in very low light conditions. Photo by Alex Monro

A team of British and Chinese botanists researching plants in the limestone karst area of South West China have discovered three new species, one from a cave and two others from deep gorges.

The new cave-dwelling plant, just described in a paper published in the journal PhytoKeys, was first discovered in 2010 growing deep within the entrance of two caves in the Guangxi province of China.

All of the plants discovered are of the genus Pilea, which is believed to contain over 700 species across the globe.