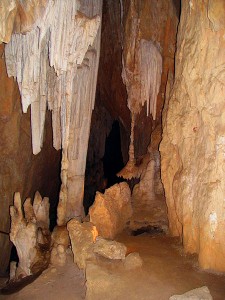 Inside Fig Tree Cave, one of the Wombeyan Caves in Australia. Photo by XLerate/Wikipedia

An 18-year-old man was rescued from one of Australia’s Wombeyan Caves on Tuesday afternoon after a fall which left him unable to move.

Rescue crews, including the Ambulance Service’s Special Casualty Access Team were called to the popular tourist caves just after 2:00pm to attend to the man who had fallen onto a riverbed in one of the caves.

The Wombeyan Karst Conservation Reserve in the Southern Highlands of New South Wales contains a number of limestone caves, many of which are accessible to the public through guided or self-guided tours.

Once the man, suspected to be suffering from spinal injuries, was brought to the surface, he was winched aboard a rescue helicopter and taken to hospital in Sydney.