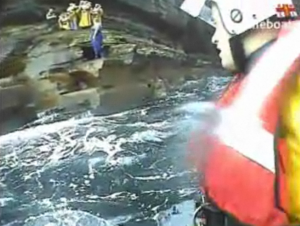 This past Tuesday a boatload of tourists had to be rescued after they became trapped in a Gloup Cave in northern Scotland’s Pentland Firth.

The rigid-hulled inflatable boat, the North Coast Explorer, carrying 10 passengers and crew was not able to exit the cave after hitting rocks and loosing its reverse thruster inside Gloup Cave. The folks were able to take cover on the rocks and made their way to the mouth of the cave while a Thurso Lifeboat was called to the scene.

Once rescued they were taken ashore at John O’ Groats. During the rescue a coastguard helicopter from Shetland and a yacht, ‘Gulan’ stood by, ready to assist.

Everyone survived the ordeal and were said to be fit and well.