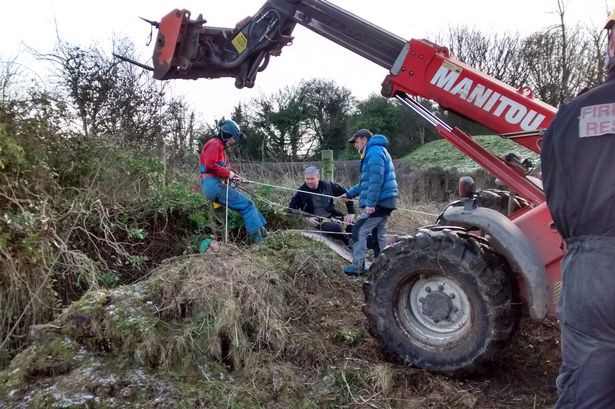 The two cows were winched out of the mineshaft. Photo via RSPCA

The North Wales Cave Rescue team recently came to the aid of two cows after they fell 30 feet (9 meters) into a mine shaft.

The incident occurred near Axton, Holywell in northeast Wales.

WalesOnline reports that the cattle had been trapped in the chest deep water for two days before they, with the help of the North Wales Cave Rescue, the North Wales Fire and Rescue Service, the RSPCA and their owner, were eventually winched to safety.

Two members of the cave rescue team – one being a vet – descended into the shaft and secured the most active animal which was winched to safety. Mark Roberts, RSPCA Inspector

Unfortunately, the second animal was in poor condition from the fall, and likely being landed upon by the other animal, and had to be euthanized.

Cows rescued by RSPCA after plunging 30ft down mine shaft [WalesOnline]