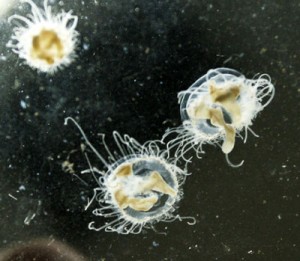 A rare type of freshwater jellyfish has been found in an underwater cave in southern China.

Thousands of endangered freshwater jellyfish were discovered by a group of police officers conducting a dive-training exercise in a cave along a river in China’s Guangxi province.

Photos taken of the jellyfish were sent to biologists at the Chinese Academy of Science, who confirmed they were indeed freshwater jellyfish, also known as the peach blossom jellyfish for their resemblance to the flower.

While freshwater jellyfish are occasionally found in China’s Guangdong, Fujian and Shandong provinces, the ones found in Guangxi look different. Chinese scientists will be working with foreign experts to determine the specific species.

The endangered creatures, one of the lowest levels of life on Earth, have been around for 1.5 billion years and are regarded as a living fossil among biologists.

Due to their strict environmental requirements of zero water pollution and water temperatures below 34° celcius (95° F) they have become extinct in other countries.