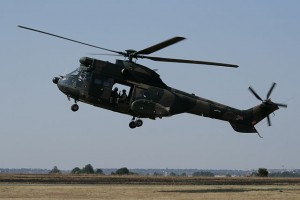 A South African Air Force Oryx helicopter, similar to the one used in the rescue. Photo by NJR ZA/Wikipedia

A German tourist was rescued this weekend after falling some 30 meters (98 feet) during a visit to Waterfall Bluff in the Transkei region of South Africa.

The 71-year-old man was part of a group of 21 tourists exploring a cave at the popular Eastern Cape attraction when the incident occurred.

Somehow during the tour he bumped his head, stumbled, and fell off the rocky ledge. While one of the guides climbed down to attend the man, the other took the rest of the group back to the lodge and requested help.

Ambulance, search-and-rescue teams and a South African Air Force Oryx helicopter converged on the scene from nearby East London, Mthatha and Durban to help the injured man.

With cloudy conditions complicating the rescue effort, it took teams 10 hours before the man was rescued. He was then airlifted to a Durban hospital where he was last reported in stable condition.