Tourist Rescued After Being Swept into Small Cave 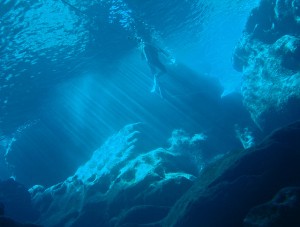 A 29-year-old woman had a close call last Friday after a wave swept her into a cave during a visit to Saipan‘s Grotto Dive Site.

Once a sea cave, the roof of part of the Grotto has since collapsed and stairs have been built to allow access down to the water level.

The woman, part of a group of Chinese tourists, was returning to the stairs after taking photos in the bottom of the grotto when a surge of waves came in and swept her into the water.

Despite her husband jumping in the water to rescue her she was sucked into a small cavity. Climbing back on land the man heard her yelling for help and saw he arm sticking out of a small hole in the rock.

Boating Safety officers and Fire’s Search and Rescue Unit members attended the scene and discovered the entrance to the small cavity was two meters (six feet) under water. Due to the hazardous wave conditions, it was unsafe to send dive rescue units to the woman so the teams decided to break the rock and enlarge the hole on the surface in order to extract the woman.

With the help of ropes, a sledgehammer, and an axe, the victim was eventually freed two hours later. She was taken, along with her husband and another friend to helped in the rescue to the Commonwealth Health Center. The three having all sustained bruises, abrasions, and lacerations.