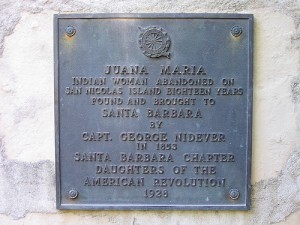 The Memorial to Juana Maria, the Lone Woman of San Nicolas Island Photo by Nealy-J/flickr

After its location was lost to history, a cave, suspected to be the home of the “Lone Woman of San Nicolas”, has been located.

The last surviving member of the Nicoleño tribe, a woman, known as Juana Maria, lived alone on San Nicolas Island, part of California’s Channel Islands, from 1835 until her discovery in 1853.

Researchers have long believed that Juana Maria spent much of her 18 years alone on the island living in and around a cave. Despite their best efforts to locate the cavity, the precise location remained a mystery until recently.

20 years of studying old maps and digging test holes finally paid off for archaeologist Steven Schwartz when field notes accompanying a 1879 survey map of the island identified the location of the cave. As it happened, the site was a previously investigated shallow depression beneath a rock overhang.

The cave, filled in after years of erosion, required a team of hard-working student volunteers to help remove about 40,000 buckets of sand to reveal a cavity measuring about 23 meters (75 feet) long and 3 meters (10 feet) high.

Although Schwartz is 90% sure it is the Lone Woman’s cave, further excavation is necessary to make a positive confirmation.