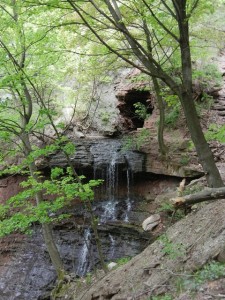 A family were rescued on Tuesday after becoming trapped in a cave along the Genesee River in Rochester, New York.

A 24-year-old woman and her parents, a 53-year-old father and 46-year-old mother, were busy searching the cave for a geocache when a severe storm hit the area and caused the small trickle of water flowing through the cave to rapidly rise.

The geocachers managed to climb onto a ledge to escape the waist deep water and call for help on their cell phones.

Some two dozen Rochester Firefighters responded to their call and lowered two rescuers about 15 meters (50 feet) to the cave where they found the trapped cachers. They then used ropes and pulleys to raise them back to safety.

The target of the expedition, a geocache titled “The Orc’s Treasure“, which describes itself as “a dark, wet journey into the home of the Orcs” has warnings indicating the dangers of flooding, and instructs people to never attempt the cache when “it has rained, while it is raining, or if rain is in the forecast”.

We would like the thank the numerous emergency crews who aided in our rescue with special thanks to Matt Sauers, Greg Drew, and 911 dispatchers. With everyone’s expertise and generous assistance all three of us were able to walk away with very minor cuts and bruises. A statement from the family