This is Gary and Terry’s third venture in the show cave business as they developed Squire Boone Caverns from 1971-73 and both are past part-owners of Marengo Cave National Landmark. The later they helped to re-develop which, having originally opened in 1883, was not-well developed when they purchased it. Gary was co-owner and CEO for 28 years until selling his interest in 2001.

Gary and Terry first began exploration and mapping of the Binkley Cave system back in 1967 and their caving group, the Indiana Speleological Survey (ISS) has been actively working, although with occasional periods of low ebb, ever since.

In February of this year, the ISS, now under the leadership of Bloomington caver, Dave Everton, connected Binkley Cave and nearby Blowing Hole Cave to form the 11th longest cave in the US at 55.88 kilometers (34.72 miles) of survey. This important connection was made in the Indiana Caverns portion of the system, which was discovered less than two years ago. Today the surveyed length stands at 56.23 kilometers (34.94 miles). 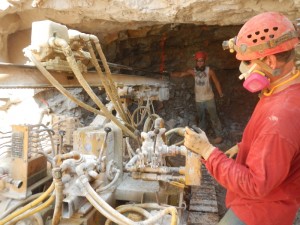 The first phase in developing Indiana Caverns involved drilling a 30” hole into the cave to allow for engineering and leveling surveys to be conducted. The developers are currently drilling and blasting a long sloping ramp and tunnel from what will eventually be the basement of the Visitor’s Center into a passage that enters the cavern on a high balcony overlooking a large room known as “Big Bone Mountain”.

The tour eventually drops into a lower level passage known by the cavers as “Blowing Hole Boulevard” where visitors will be treated to a boat ride on a small underground river.

If all goes according to plan, Indiana Caverns will open for tours around April 15, 2013.

People interested in following the development of the cavern on a daily basis can do by checking out Indiana Caverns on Facebook. It is anticipated by a full website will be up by early in August at IndianaCaverns.com.

About Gary Roberson
Gary crawled into a cave at age 11 on his first Boy Scout camping trip and cave’s have been his passion every since. He is now the president of Indiana Caverns and in charge of it's development.
Sorry, comments have been closed.