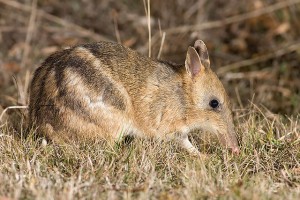 Australian cavers have discovered a cave system in Queensland filled with fossils.

The find, estimated to contain specimens up to 500,000 years old, is so dense with fossils that a 120 kilogram (265 pound) sample of sediment brought out of the cave for further analysis has shown that it contains more fossils than dirt.

A number of species have been already identified, from thousands of small rodents and frogs to larger animals, such as a 2.2 meter (7 foot) long mega kangaroo.

Queensland palaeontologist Gilbert Price, the scientist studying the find, believes that the fossils could hold important information about how the ancient animals adapted to climate change and evolved to their current forms.

The area, rich with caves, was once part of an ancient rain forest but is now an arid grassland.

What we’re trying to do up here is really look at the fossils and look at the animals and see how they responded to those prehistoric climatic changes, and that’s something that’s really quite relevant to today Gilbert Price, palaeontologist

Unfortunately, even as cavers continue to find further passages with significant deposits, there is little funding for the important discovery that has the potential for many lifetimes’ worth of work for scientists.