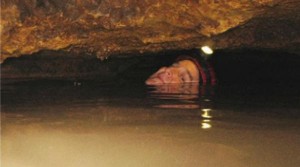 A small parcel of land in Comal County, north of San Antinio, Texas is home to a cave that has been found to contain prehistoric fossils. William “BT” Price, a retired banker who bought the land two years ago has been exploring a cave on his property with the help of some friends.

During their explorations, they have recovered rare fossils of creatures that lived in the area during the late Ice Age. Pieces of mastodon teeth and an almost complete skull of a Homotherium, an animal that was part of the saber-tooth tiger family, are just some of the discoveries that have been recently verified by Concordia University biology professor Laurence Meissner.

The cave, called “Twinkie’s Cave” after his fiancée’s dog, is at least 1.6 kilometers (one mile) long and quickly becomes full of spring-fed water. At the current limits of exploration there are sections when the water and the ceiling are separated by mere inches, leaving little breathing room. It’s home to a number of creatures, including a small colony of bats.

The long-term goal is to have the fossils preserved, and then to donate the cave to either a caving group or to state-funded paleontology organization.