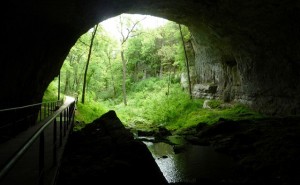 A fossil found in a Missouri cave has been identified to belong to a long extinct type of shark.

Initially discovered a few years ago inside Smallin Cave near Springfield, the fossil was only identified recently when paleontologist Matt Forir of the Missouri Institute of Natural Science visited the cave.

I took a little brush in here, and some water, and cleaned it off, and we knew immediately what it was. Matt Forir, Missouri Institute of Natural Science Paleontologist

The bone, a spine from a shark, would have would have run along the front of one of the top fins of the estimated one meter (three foot) long fish.

Believed to be about 350 million years old, the shark would have lived in a large inland sea, which at that time, would have completely covered the area.

Although it has been identified of the genus ctenacanthus, the exact species has not been able to be determined.

If it’s a new species, then it’s the only one in the world documented at this point, Matt Forir, Missouri Institute of Natural Science Paleontologist

Until a decision is made on whether the fossil will be removed or stay in the cave, it will be visible to those visitors who take the wild cave tour.

Fossil from ancient shark discovered in the Ozarks [ky3.com via Dean Wiseman]