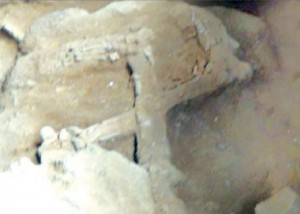 A complete human skeleton has been excavated from a cave in western Sri Lanka.

Discovered in the Fa Hien Cave in the district of Kalutara, Western Province, Sri Lanka, the skeleton, thought to be a Homo sapien, could be the oldest found in South Asia so far.

Items found in the same layer as the skeleton have been dated back 37,000 years, suggesting that the skeleton is likely around the same age. To find out for sure, officials plan to get it carbon-dated.

Stone tools were found with the skeleton, as well as ornaments made of beads and weapons made of animal bone. These discoveries are helping to build a picture of the eating habits and rituals of these ancient people.

Although human remains were found at the cave in the 1960’s and 1980’s, this find, made a few days ago, represents the first complete pre-historic human skeleton discovered in Sri Lanka.